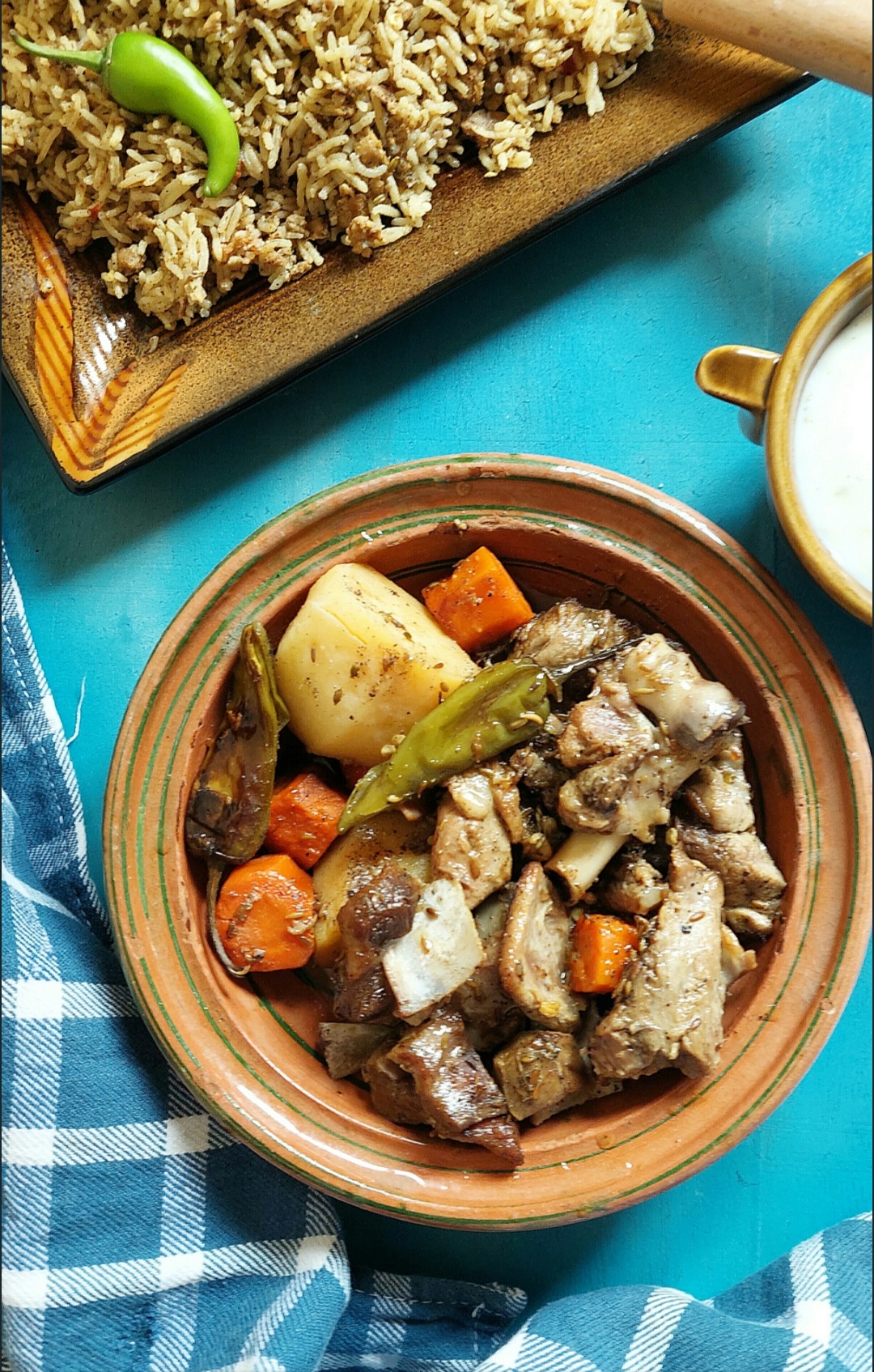 If you have visited the Northern areas of Pakistan, you must be familiar with the hearty and soul satisfying dish of Namkeen Gosht. ‘Namkeen’ means salty and ‘Gosht’ is meat, in this case lamb or goat meat. Meat is the highlight of the cuisine of the mountain people. It provides the energy and warmth required to combat the rough terrain and extreme cold weather. The lives and the food of the people in the Northern mountains of Pakistan is simple. They raise their own animals on organic fodder and use basic spices and uncomplicated cooking methods. As a result, their food looks rustic, but comes from the heart. From old school farming to raising the animals with care and then fetching the wood for cooking from miles away, their food is a labour of love.

Tracing Back the Origins of Namkeen Gosht:

Namkeen Gosht is, basically, slow roasted meat which is not only popular in the Khyber Pakhtunkhwa region of Pakistan but also in the adjoining tribal belt, neighboring Afghanistan and beyond that in Central Asia, you can find similar heartwarming meaty dishes. In fact, the influence of Central Asia, Mughals (whose ancestors were Mongols) is very strong and obvious on the cuisine of Northern Pakistan. In it’s most authentic version the meat in such dishes would be seasoned just with salt, pepper and ginger and cooked for hours in a clay pot, buried under hot ashes. Chunks of animal fat were added to keep the meat moist and succulent. Sometimes whole vegetables or big chunks of onions, potatoes and carrots would go in too to make it more filling for a family meal.

A Vivid Picture of the Cuisine:

In the book Curry: A Tale of Cooks and Conquerors, Lizzie Collingham paints a very vivid picture of the cuisine and it’s evolution –

‘At a garden party at Khyber in the 1920s, a British civil servant sampled the sort of [goat] kababs Babar would have eaten in the early 16th century. The local Afridis, a warlike nomadic mountain people, had invited the British to watch a display of guns, fireworks, and an exhibition of how they attack in enemy’s position. An old Afridi came up and offered a lump of sheep’s flesh freshly roasted. These had to be pulled off and eaten with fingers.’

Looking closely at the ingredients of Balti and Karahi Gosht, one can clearly see the resemblance with Namkeen Gosht, with the exception of tomatoes, red and green chilli peppers. Tomatoes and green chillies are not indigenous to the region. Black pepper, though, was native to India for thousands of years. It travelled from the south to the northern mountains with travelers, conquerors and explorers. In many ways, the history of black pepper, considered ‘black gold’ back then, is intertwined with the history and geography of the modern world. One theory says that when Namkeen Gosht traveled from the north to the plains of Punjab, the local people started adding tomatoes, green chillies and fresh coriander to it. Or when the fresh produce from Punjab started reaching the mountains more frequently, mutton Karahi or Balti was born.

Since Eid-ul-Adha ( Muslim festival of sacrifice) is a very meat dominating celebration, one of the most popular dish on the menu is Namkeen Gosht. In fact, in some families it’s only cooked on the occasion of Eid, especially, the second day of Eid, as the cooking requires rather long time. My husband is such a fan that I cook it quite often for him and his friends. To cook often, I needed to find a solution to make it hassle-free and somewhat quicker to cook. So I started cooking it in the oven, where it gets done in around 90 minutes. Meanwhile, I use that time to finish other chores or just chill! I add olive oil instead of animal fat to make it less heavy and big chunks of onions. potatoes and carrots for a well-rounded experience. You can skip adding vegetables for a pure meaty indulgence.

The quantity of salt may seem on the higher side in this recipe but salt is both meat tenderizer and tastemaker in this recipe. You can adjust according to your taste. Always select best quality meat for this dish because the actual flavor and tender bite of the meat shines through as it is not lost in a multitude of spices. Serve it with side of hot naan and fresh salad.

Heat oil in a frying pan on medium high heat, add meat and fry for 5-6 minutes till the juices are properly sealed in the meat and out side is golden brown.

In an earthenware pot add meat, vegetables (if adding any) and the rest of the ingredients. Add 3 cups water.

Knead firm dough with flour and water. Cover the pan and seal the tiny creek between the lid and the pot with dough completely so that no steam can escape.

Cook on very low heat for almost 2 hours. The meat should be falling off the bones by the time it’s done, serve hot with naan bread.

Tuck the vegetables on the sides (if using any).

Seal the dish with a foil sheet so that the steam stays in.

Place in the oven for 90 minutes. Check after that time, the meat should be very tender. If not, cook covered another 20-30 minutes.