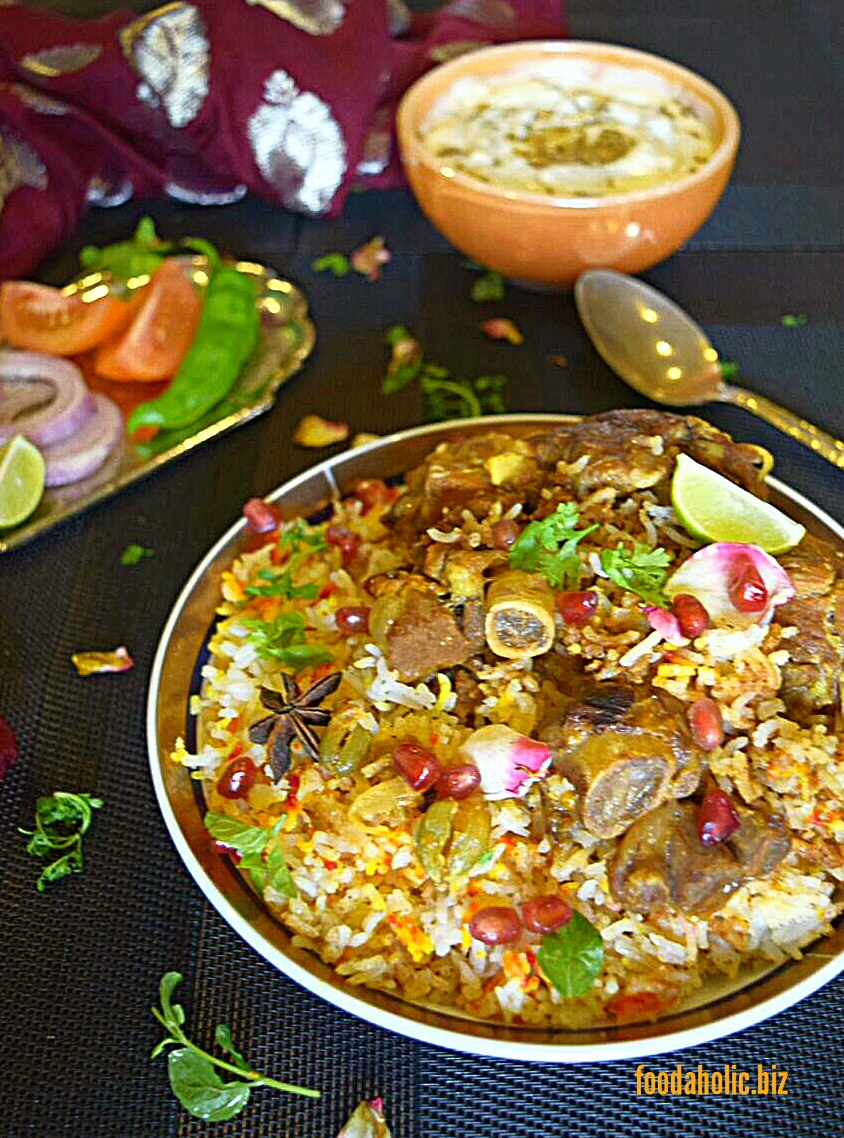 As a child, the exquisite aroma of Biryani, wafting out of the kitchen, spreading through the house and engulfing my senses always filled me with sheer joy of anticipating a scrumptious dinner. Now I see the same glow in the eyes of my daughters whenever I cook Biryani. There is definitely something very captivating about this dish!

What Is Biryani ? Even if you have never tasted it, I’m sure you have at least heard of the ubiquitous biryani. After all it’s the queen of all rice dishes – glamorous, classy, ritzy, vibrant and bold. When biryani is on the table, other dishes are usually reduced to the role of supporting cast. The recipe originated as a layered rice and meat dish, topped with aromatics, evolved into a colourful, fragrant and rich cultural icon.

Legends and Origins :
The history of biryani is as enchanting as is the taste. There are many different stories about how Biryani came to South Asia. The legend of the cuisine in the region is as diverse as the invaders, many and various, who influenced it. The reign of the Moghuls left the deepest mark on the eating habits of local people. It’s largely believed that the Moghuls brought Biryani to the subcontinent as the dish reflects their extravagance, refinement, love for beauty and attention to detail.

I particularly find this little story about Biryani very interesting – they say, once Mumtaz Mehal, wife of Emperor Shah Jahan, visited the barracks of soldiers and found they were undernourished, so she ordered the royal chef to prepare a nutritious meal for them, consisting of rice , meat and spices.

And then some say the dish originated in west Asia. The nomadic tribes buried their food in clay pots full of meat, rice and spices in a pit of ashes, after slow cooking a long time, when eventually the pot was dug up, it unveiled the scrumptious meal of Biryani.

But since the word “Birian” is of Persian origin, meaning “fried before cooked” , it makes more sense that the Biryani we know today has Persian roots.

Biryani today reflects regional tastes of people from all over South Asia. Some of the most famous are Mughlai, Sindhi, Bombay, Memoni, Hyderabadi and Tehri Biryani. They say it has over 40 distinct varieties in Hyderabad alone. But for clarity of procedure I divide it into two different types – Pukki Biryani and Kachi Biryani.

Pukki Biryani, as the name suggests, is prepared with separately cooked rice and meat, layered in one pot, topped with aromatics and steamed together till fragrant and fluffy. This allows the rice and the meat to retain their individual flavours as well as absorb more depth from saffron, rose water or pandan/kewra essence.

Kacchi Biryani is prepared with raw meat and raw rice. The meat is marinated in yogurt and spices to tenderise it then it is placed at the bottom of the cooking pot, topped with rice, fresh herbs and aromatics. Finally, the pot is sealed with dough to prevent any steam from escaping. It’s cooked using dumpukht or slow oven method.

From being the royal cuisine to a household name in India, Pakistan and Bangladesh with various versions, it has now become even a very affordable street food in Pakistan. This version popularly known as Student Biryani is sold near offices, colleges and business centres in disposable lunch boxes as a complete, wholesome and low budget meal for students and office workers. For merely 150 Pakistani rupees/1.30 US dollars you can get a piping hot plate of basmati rice, a big piece of chicken and potato with mint raita on the side.

The huge and very intimidating question for the beginners is – How to Make Biryani ?

Let’s first clear the difference between Biryani and Pulao – the cooking technique!
Biryani, is cooked with par boiled rice, which is then combined with other ingredients, sealed and put on “dum” (put on a very low heat, so that all the flavors inside the pot merge properly).

While Pulao is made by stir frying the rice in ghee and spices, and then cooking them in a meat/vegetable and spice stalk.

This recipe for Biryani is very basic and can be modified according to your taste and availability of ingredients. I used only the very essential ingredients that are mostly pantry staple or easy to find anywhere. You can replace chicken with lamb, beef, fish , prawns, eggs, mushrooms or vegetables.

Here are a few points to remember :
– Use good quality basmati rice only.

– Make sure you use a wide mouthed cooking vessel with thick base so that the rice have enough space to fluff up and cook evenly.

– Bruise the cardamom pods to release flavour before adding to water.

– Add sufficient spices. The spice concentration reduces after the whole thing comes together.

– Remember to boil the rice in lots of water and salt (pretty much like a pasta).

– Use finger trick to check if the rice is done, I take a grain of rice out and press it between my thumb and forefinger. If the grain breaks into 2 parts, it means your rice is partially cooked which is what we require for this recipe. It’s time to strain.

– Meat/vegetable curry should be just cooked and completely dry because it will get
cooked further in the final step and if any liquid is left in it the rice will become soggy.

– Don’t use too much of curd, it makes the rice clumpy.

How to Make Biryani :

Add salt ( 1 teaspoon per 1 cup rice). It seems like a lot of salt for one dish but don’t worry it’s not. We shall strain the the rice and most of the salt will drain away.

Add 3 bruised green cardamoms, 1 bay leaf and cinnamon to water, bring the water to boil. Add rice, cook on medium heat till the rice are almost done but still firm. You have to par cook the rice which means they should be 3/4 cooked and rest will cook later with meat. DO NOT over boil the rice.

Strain rice and spread them out on a tray to so that they cool down and the cooking process stops for the time.

In another pan heat 1/2 cup oil, add onions and fry till they are golden brown.
Remove half of the fried onions and set them aside.

Add chopped tomatoes, dried plums and cover the pan. Reduce heat to medium low and let the chicken masala simmer till chicken is cooked and liquids from chicken and yogurt are TOTALLY evaporated from masala (about 20 minutes).

Generously grease the bottom and sides of the deep pan/wok with remaining ghee or oil. Layer rice and chicken masala in the pan, five layers in all – 3 rice and 2 chicken.

For Dum
Either cover the pot/vessel with a large foil sheet and place the lid on top.

OR make some dough with whole wheat flour or all purpose flour, roll it into a thick strip and stick it around the rim, sealing the lid and pan together.

Place the pan on top of a cast iron griddle/Tawa or over a heavy frying pan so that the bottom layer of rice doesn’t get burnt.

Reduce the heat to lowest possible. Leave the rice for at least 20 minutes.