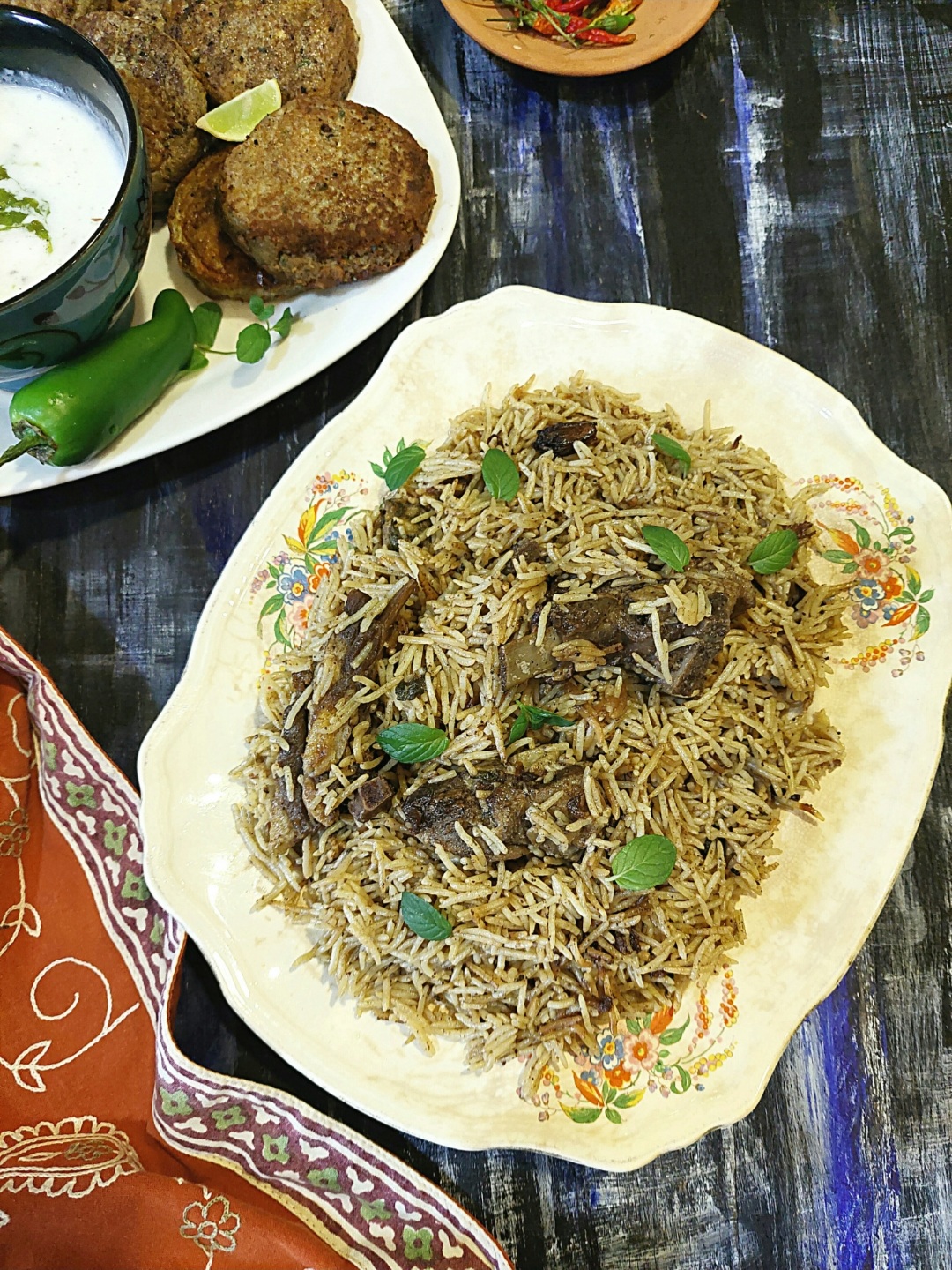 What Is Yakhni Pulao:

Yakhni in Persian is a meat stew, soup or broth and is often used as an energizing soup in winters or as a base for many other dishes. It is known as Yahni, yahniya or yakhni in Greek, Arab and South Asian cuisines. It’s a centuries old meat and bone broth that was served to Alexander in Bactria. The broth/ stock can also be made using mutton or lamb trimmings with aromatics, mixed whole spices. Aromatic spices are the essence of this pulao or pilaf. The traditional yakhni is made using fennel seeds, dry ginger powder, cinnamon, cloves, black and green cardamom but each family has a favorite recipe that varies slightly. For the Yakhni Pulao, rice is cooked in this mutton broth till each grain absorbs the richness and swells up with layers of flavor from meat and spices.

On The Trail Of Pulao:

The story of pulao goes a long, long way back! Honestly, I haven’t come across any meaty delicacy in the Indian subcontinent that doesn’t have Mughal signature all over it. Yes, pulao is also a gift from the Persian cuisine for us. But the story of pulao goes way back from the Mughal conquest of the subcontinent and spreads far and wide geographically. Pulao is quite a universal food; embracing many world cuisines in it’s irresistible fragrance. Ancient conquests and nomadic shepherds helped spread this royal centerpiece dish to all corners of the old world. The Persian scholar Abu Ali Sina was the first to document Pilaf in his 10th century works which included preparation of medicines and meals. He is still considered by many Tajiks as the “Father” of Pilaf and consequently Persia is considered the birthplace of the Pilaf. Ancient Persian Pilāv was a very popular rice dish, seasoned with anything from bits of lamb or venison meat , dried fruits and whole spices.  Pilāv is also used as stuffing in a whole roasted lamb on festive dinners.

The history of Pilaf reveals that each new area adopted the dish and added its own spin. The Turks and Egyptians, who were conquered by the Persians were among the first cultures to use Persia’s Rice Pilaf techniques. The Greeks adopted the Pilaf dish and adapted the word as “Pilaffi.” The next great expansion of Rice and the Pilaf occurred with the Muslim Caliphate that expanded to the east and west, and took rice along with them. The Arabs in Sicily took the rice to Italy and hence the birth of risotto. Trade and Caliphate, during the Abbasid dynasty, spread it to Spain. Paella is one form of pilaf, although some theories refute it. Similar dish in today’s Hungary and Poland is “Rys Sumiany”. It was actually brought by the Ottomans during their conquests. So the fun of the dish is not only in enjoying the meal but seeing life and culture evolve through its variations.

I’m sure when the Mughals arrived in the subcontinent, they must have found the mostly vegetarian local cuisine difficult to adapt to as they were used to a hearty meat-based Central Asian diet. So pulao became a staple of the royal menu.  The Muslim Nawabs  inherited their cuisine from the Mughal courts. The chefs of Awadh prided in making the fragrant pulao and stressed that the sophistication of the dish was in its subtlety of flavors, where the unmatchable essence of basmati rice was enhanced by the gentle fragrance of whole spices. Pulao must have been such an easy addition to the naturally hearty and wholesome Punjabi cuisine! With abundance of rice, cattle and dairy in the region, Pulao quickly became a celebration dish. Punjabis added their love for onions, fresh greens and yogurt to the recipe.

I grew up eating the traditional formal version of Punjabi Yakhni Pulao on Eid and special occasions, paired with the sides of Palak Gosht (meat and spinach curry) , Shami Kebabs and Raita. My mom always cooked the elaborate version but I, being a lazy cook, created a one-pot version for my busy days as my husband and kids love pulao and they want it not just on Eid but every other weekend or, if I surrender, even on weekdays. If you want that shortcut version, check out my recipe for One Pot Chicken Pulao. But on Eid I always cook the elaborate version because, believe me, it’s a feast all on its own! The rice are fried briefly first with caramelized onions and whole spices, and then cooked in the yakhni/stock. Once the rice is almost fluffed in the broth, the pot is sealed shut and the remaining cooking is done in steam. The perfect Yakhni Pulao is one where the rice grains don’t get clumpy, the spices don’t take over the flavor of rice and the meat is fall off the bones tender.

First get the yakhni ready. For yakhni take a deep pan and add ghee/oil to it. Heat oil on medium heat. Now add onions and meat to the pan.

Fry onions and meat till onions just change color and the juices in the meat are sealed.

Now add the remaining yakhni ingredients and 6-7 cups of water. Cook covered on medium low heat till the meat is tender and the liquid reduced to almost half.

Now remove the meat from yakhni with a slotted spoon and strain the yakhni through a sieve. Discard the onions, garlic cloves and spices.

In a separate deep pan, with a wide mouth and tight fitting lid, add the oil and heat up on medium heat.

Now add sliced onions and fry till golden brown and caramelized. The beautiful color of your pulao depends on the color of the fried onions so neither burn them nor leave too pale.

Once the onions are golden brown add mutton, ginger- garlic paste, garam masala powder, cumin, turmeric, salt and yogurt, stir on high heat for a few minutes or till the masala gets dark in color and aromatic.

Now add yakhni/ mutton stock and pre-washed rice. yakhni or the liquid content should be an inch higher in the pan than the rice. If the quantity of yakhni doesn’t come up to that level, you can add a little water. Cover the pan, reduce heat to medium high. Cook covered until the rice fluff up and the stock is just almost gone.

Reduce heat to minimum, place a skillet over the heat and the rice pan on the skillet, wrap the lid in kitchen towel and cover the pan tightly.

Leave on ‘dum’ for another 5-10 minutes. The rice shall be ready when they are no more starchy. Garnish with more caramelized onions, fresh mint, coriander and green peppers.

Serve hot with any curry of your choice and raita. We love to pair it with Shami Kebabs, Palak Gosht and Lamb Almond Korma.