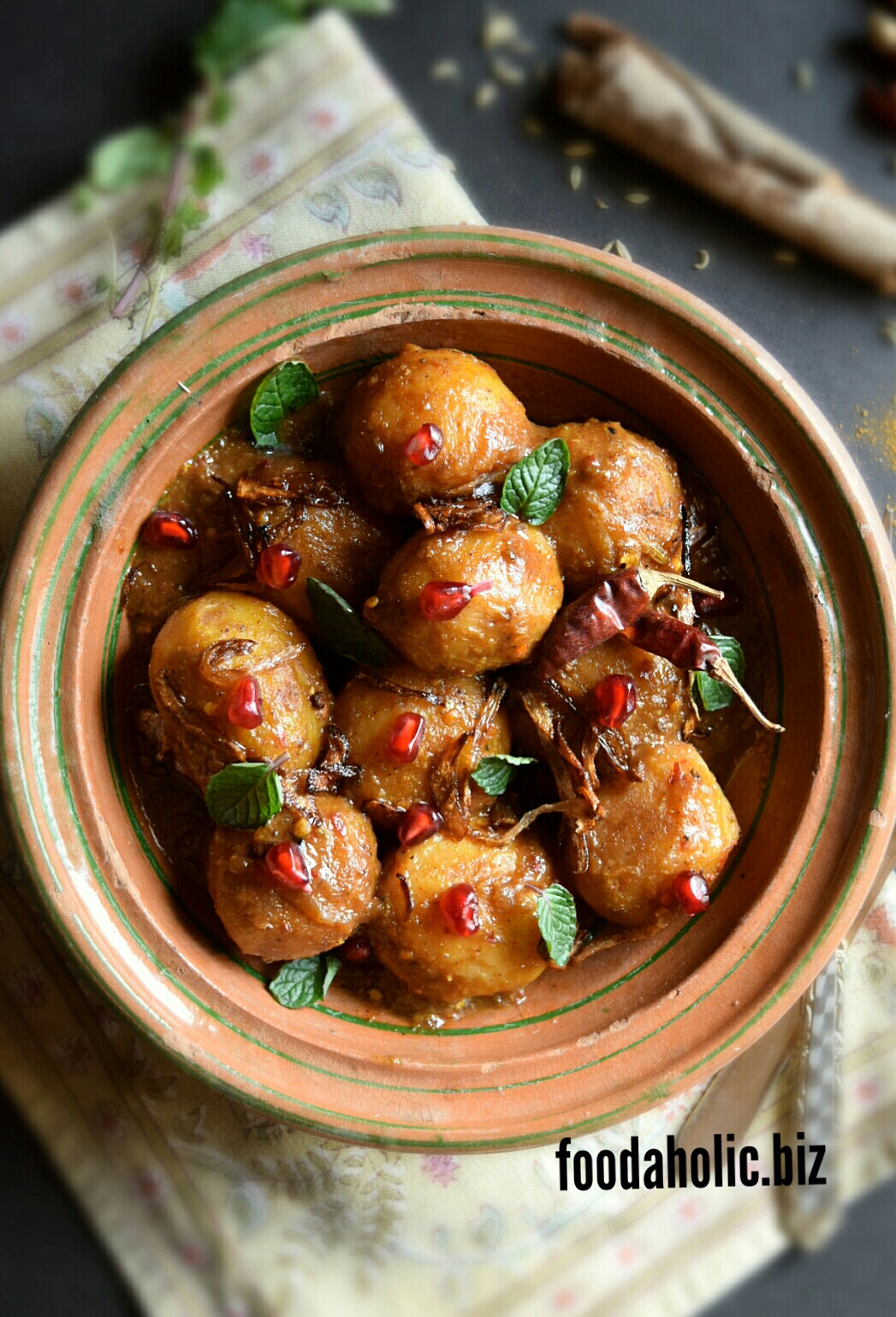 Potatoes With A Panache:

Usually we associate qualities like “hearty”, ‘yummy” and “rustic” with potato dishes. These Afghani Tamarind Potatoes have an oomph factor and verve of flavour like none other potato dish I’ve tasted before (and that is saying something, considering how big a potatoes fan I am) . You can proudly serve them in a formal dinner alongside any heavyweights of the cuisine world. Your guests will sniff their way to these delicious and aromatic potatoes, ignoring all the kormas and pulaos enroute. It’s a beautiful balance of decadence with zingy and zesty from tamarind, fennel, mint and pomegranate.

Have you had South Asian food before? If your exposure to it is only limited to the food served in Pakistani, North Indian, Afghani or Bengali restaurants anywhere in the world, then you must believe that it’s a primarily a non veg cuisine. This assumption is not wrong because the regions influenced more by Persian invasion or closer to Central Asia do have a meat heavy cuisine but not the way most restaurants and eateries of these areas portray it. There is a wealth of vegan and vegetarian recipes that are an essential part of the routine menus at homes. These recipes incorporate all sorts of grains, lentils, vegetables and fruits .

If you are interested in vegan/vegetarian recipes, you may also enjoy this video tutorial on quick & easy Pumpkin Curry

The Hidden Gems of Veg Recipes in Afghani Cuisine:

Honestly, I’ve never eaten any vegan or vegetarian dish, except for a basic fresh salad, in any Afghani restaurants I’ve ever visited here in Pakistan. And we have quite a lot of them here, Afghani cuisine being very popular here. My introduction to the vegetarian side of the cuisine is thanks to my multicultural family. The maternal side of family hailing from Afghanistan meant my mum’s cooking had a strong influence of the cuisine. I grew up eating Boranis without ever giving a thought to the background. Borani is said to be of Persian Jewish origin – a yogurt based dish, flavoured with garlic. To that you can add any vegetable – eggplant, spinach, celery or even squash. When I started blogging that I became interested in exploring the cuisines on a deeper level which led me to a whole new vista of beautiful vegan and vegetarian recipes. These Afghani Tamarind Potatoes are one such happy find!

If you’ve read Khaled Hosseini’s A Thousand Splendid Suns, you couldn’t have missed all the sensual Afghan food references! They extend much beyond the kebab culture to delicacies like shalqam, mantu, sabzi, kichiri and daahl. Afghan cuisine has strong influences on the cooking methods from Middle East and Central Asia, and from Pakistan and India in use of spices but it has a distinct identity of it’s own. It uses milder spices, particularly those that are more aromatic with a sweeter flavour, such as cinnamon, green cardamom, fennel and coriander. Tomatoes, yogurt, pomegranate and tamarind balance the sweetness. Bamyan province is famous for growing potatoes and Afghan cuisine has a lovely variety of potato dishes – Katchalu Borani (potatoes in yogurt sauce) and Katchalu Bolani ( potatoes stuffed in flatbread) are two of the most famous. Imli Katchalu is a delicious dish of twice cooked potatoes, coated in a tangy spiced tamarind sauce. The garnishes are quintessential to the whole experience as the crispy decadence of caramelized onions, tart juiciness of pomegranate and freshness of mint makes each bite a well-rounded delight. It can be a beautiful side, warm salad or an appetizing midday snack.

Tuvar and Capsicum Masala by Ever Green Dishes

Black Til Ladoo by Indrani Will Teach

So if you don’t have ready to use tamarind paste then soak 1/4 cup of tamarind (sticky pulp and seeds) in 1 cup of hot water for 30 minutes. When the pulp is soft, rub with your hands to remove it from the seeds. Drain the whole mixture through a sieve to get the thick tamarind liquid.

Meanwhile boil potatoes till just done. Peel them when they are cool enough to handle. Poke them 3-4 times with wooden skewers.

Heat oil in a pan over medium heat. Now add onions and fry till crispy brown and caramelized. remove from oil and set aside,

Add potatoes to the oil and fry till golden brown on al sides. Remove from oil and set aside.

Pour off most of the oil from the pan, leaving only 2 tablespoons behind.

Add ginger and garlic and stir fry for a few seconds. Stir in all the spices with a splash of water (1/4 cup). Let the masala simmer for a couple of minutes.

Add in the potatoes and half of the fried onions with tamarind paste and salt. Add 3/4 cup more water. If you are using homemade tamarind liquid then adjust the liquid quantity accordingly. Cover the pan and lower the heat. Let Afghani Tamarind Potatoes simmer till the sauce thickens.

Serve as side with lentils, pulao and naan or enjoy as warm salad.